VANCOUVER, BC – January 22, 2019 – INCA ONE GOLD CORP. (TSXV: IO) (Frankfurt: SU9.F) (SSEV: IOCL) (“Inca One” or the “Company”) is pleased to announce consolidated gold production for December 2018 from its Chala One Plant (“Chala One”) and its recently acquired Koricancha Plant (“Kori One”), and full year 2018 production results. All comparative year over year (“YOY”) production numbers relate only to Chala One in 2017. Consolidated production in 2018 is on a 100% basis and includes Kori One for the period of August 21st to December 31st.

Deliveries in December also reached a new all-time high in a month, totaling 6,111 tonnes, an increase of 293% YOY and consistent with the 6,012 tonnes delivered the previous month of November 2018.

The most significant milestone achieved in 2018 was the Companyâs purchase of a second processing plant, the Koricancha ore processing facility in Peru. It instantly increased Inca Oneâs permitted operating capacity to 450 tpd from 100 tpd. The acquisition immediately doubled throughput and diversified the Companyâs operating platform, adding over 200 tpd of available throughput. Additionally, the transaction added economies of scale opportunities allowing for centralized purchasing, crushing, desorption and smelting activities. Full integration of Kori One with Chala One continued through to the end of the year with a specific emphasis on improving Kori Oneâs cost efficiency and optimizing operating synergies between the two facilities. 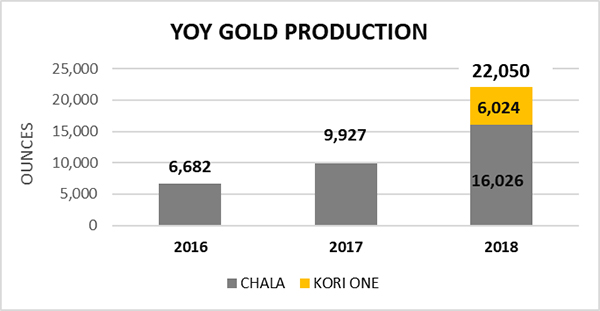 Edward Kelly, President, and CEO commented, â2018 was a transformational year for Inca One highlighted by production records, operational profitability, and a major acquisition. In our fourth and most productive year of commercial operations, we focused on growth while maintaining a vigilant eye on costs. Inca One was able to validate its business model and align its objectives to become a leading commercial gold processor in Peru.â

Looking ahead to 2019, the Company anticipates further production growth given the available capacity. The purchase of a second processing facility was aligned with Inca Oneâs growth objectives and allows for immediate scaling the production profile. Inca One intends to build a significant cash flowing business that will benefit our shareholders in the future.

Inca One is a Canadian-based mineral processing company. The Company's activities consist of the production of gold and silver from the processing of purchased minerals located in Peru. Peru is the 6th largest producer of gold in the world and the Peruvian government estimates the small-scale mining sector accounts for a significant portion of all Peruvian gold production, estimated to be valued approximately US$3 billion annually. The Company purchases its minerals from government-registered small-scale mining producers from various regions and processes it at its 100%-owned Chala One and 90%-owned Kori One milling facilities, located in Arequipa, Southern Peru.

On behalf of the Board,

Statements regarding the Company which are not historical facts are "forward-looking statements" that involve risks and uncertainties. Such information can generally be identified by the use of forwarding-looking wording such as "may", "expect", "estimate", "anticipate", "intend", "believe" and "continue" or the negative thereof or similar variations. Since forward-looking statements address future events and conditions, by their very nature, they involve inherent risks and uncertainties. Actual results in each case could differ materially from those currently anticipated in such statements due to factors such as: (i) fluctuation of mineral prices; (ii) a change in market conditions; and (iii) the fact that future operational results may not be accurately predicted based on this limited information to date. Except as required by law, the Company does not intend to update any changes to such statements. Inca One believes the expectations reflected in those forward-looking statements are reasonable but no assurance can be given that these expectations will prove to be correct and such forward-looking statements included herein should not be unduly relied upon.

This press release shall not constitute an offer to sell or the solicitation of an offer to buy, nor shall there be any sale of these securities in any state in which such offer, solicitation, or sale would be unlawful prior to registration or qualification under the securities laws of any such state.